On our visit to England this time we decided to visit Gothenburg followed by Copenhagen.  I have a cousin who lives in Gothenburg so it was a good excuse to visit.  We took my mum and dad with us who are in their late eighties but still very active.

Gothenburg is the second largest city in Sweden and situated on the west coast of the country.  It’s a beautiful city to visit and has many Dutch like canals and leafy avenues lined with shops, restaurants and bars.  Perfect for a weekend getaway or mid-week break.
Tip: Sweden is largely a cashless country as we found out very quickly!  Which means that the krona my dad had changed up went mostly unspent.

We flew with Ryanair from Stanstead to Gothenburg.  Now everyone knows Ryanair is a budget airline with everything do-it-yourself- apart from fly the plane.  So I knew I had to check in on-line before otherwise you get charged more for doing it at the airport.  There was no printer to print out boarding passes so I thought no problem, I’ll get them at the little booths at the airport.  They don’t have them anymore!  I had downloaded them onto my IPad, but this was where the problems started.  The IPad was too big for the scanner!  Well to cut a long story short and with plenty of hold ups behind us, we were almost the last on the plane.  The young girl in front of me suddenly collapsed with a huge knapsack on her back against me, so I dropped everything and tried to get the backpack off her, she must have been carrying every text book she owned.  So while she was being taken care of we hurried onto the plane, the last to take our seats, phew!

We were staying at the Scandic Rubinen for three nights, just enough to see some of glorious Gothenburg.   We arrived fairly late in the evening so checked in quickly and had dinner at the hotel restaurant.  The Rubinen is in a good location, right on Avenyn.  There are shops, restaurants and bars lining the street.  Within walking distance of many well known sites.  There is also a rooftop bar with amazing views.

From the Roof Top Bar of the Scandic Rubinen

The Avenyn at night

After an amazing breakfast the next day, my cousin Michael came to meet us to show us some of the sights.  The weather was quite dreary and grey but we were all well dressed up and not too worried.
First up was the famous statute of Poseidon. The statue was inaugurated in September 1931, by the famous sculptor Carl Milles.  Standing there in all his glory, he was not at first popular with the locals.  Apparently he was at first made to scale but had to be scaled down, due to certain anatomical features!

Rugged up and ready for the day

Next up was a walk towards the harbour, a fairly long walk for my mum and dad, but they were doing their best to keep up.  We headed for the famous fish church – Feskekorka.  The building resembles a neo-gothic church.  There is a restaurant inside and many fish counters.

Trying to blend in. I love these statutes of old fisherman 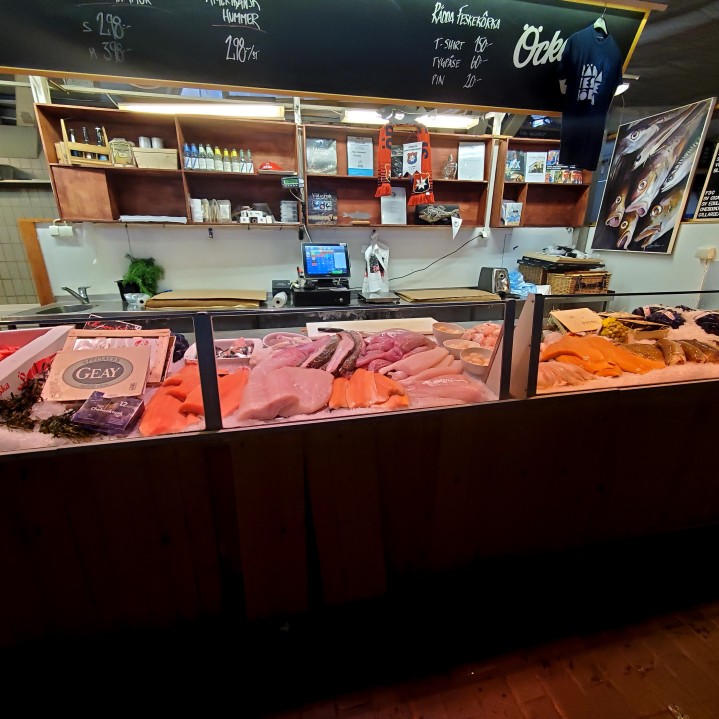 So many kinds of fish 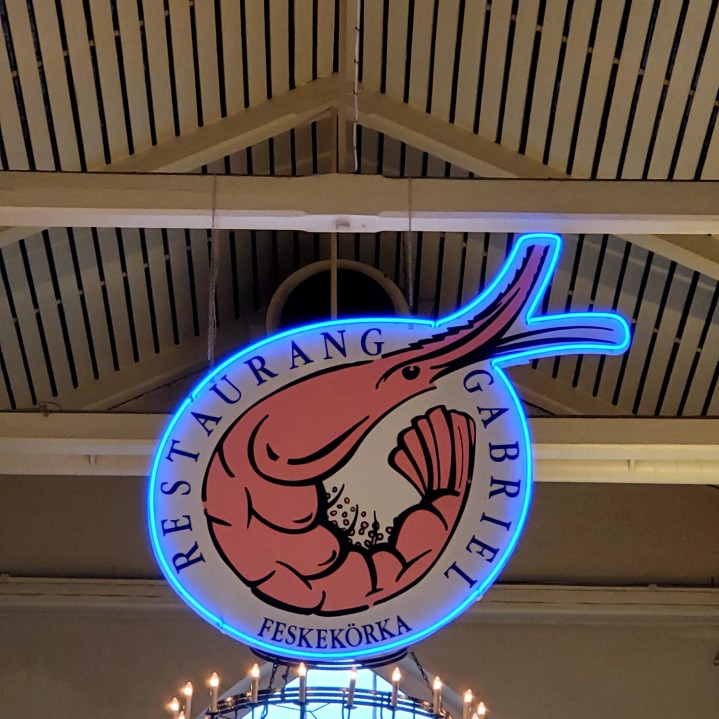 The restaurant inside the “fish church”

Next we headed to the botanical gardens to have a wander around.  As it was Autumn the trees were turning golden and looked glorious. 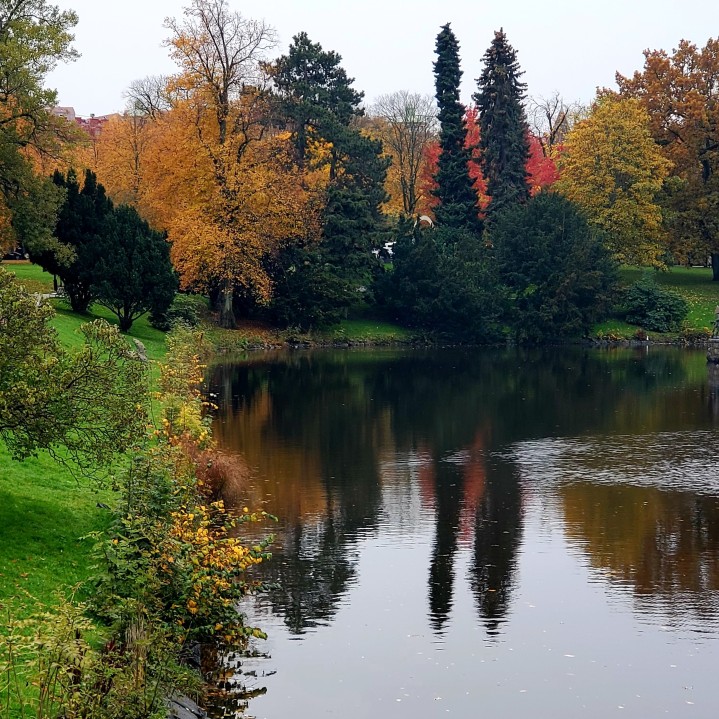 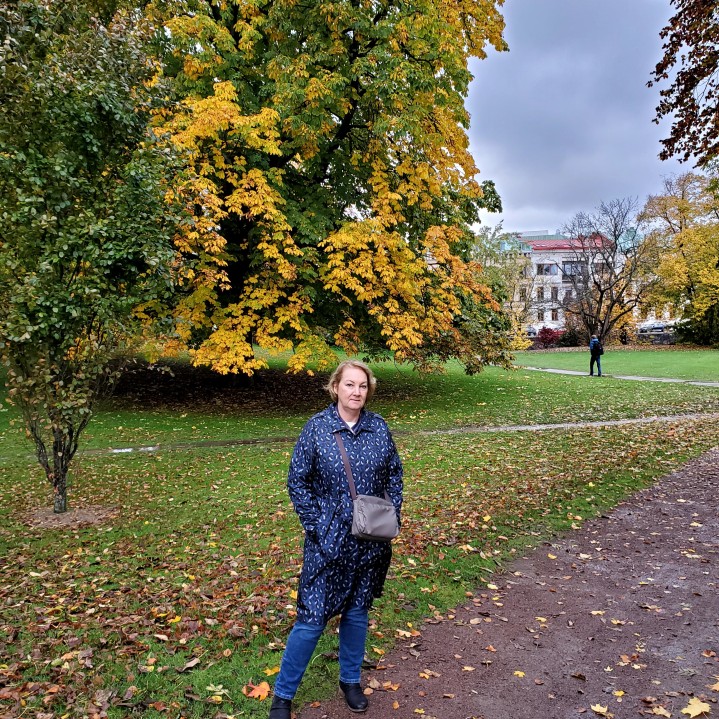 One of the statues in the botanical gardens

Off to the shops

I’m wearing a raincoat that I bought in Perth just before we left.  I have to say it’s been the most amazing purchase.  Completely waterproof and lightweight, folds up into a small bag and has kept me dry from the most heavy downpours.  It also has a massive hood so no need for an umbrella.

Photos from our walk around Gothenburg

Statue of a girl covered in fish scales

Overlooking one of the many canals in Gothenburg

The German church, also called Christinae church, is located in central Gothenburg near the moat. The church was named after Gustav II Adolf’s daughter, Queen Kristina. It was inaugurated in 1748.  Source:  www.goteborg.com 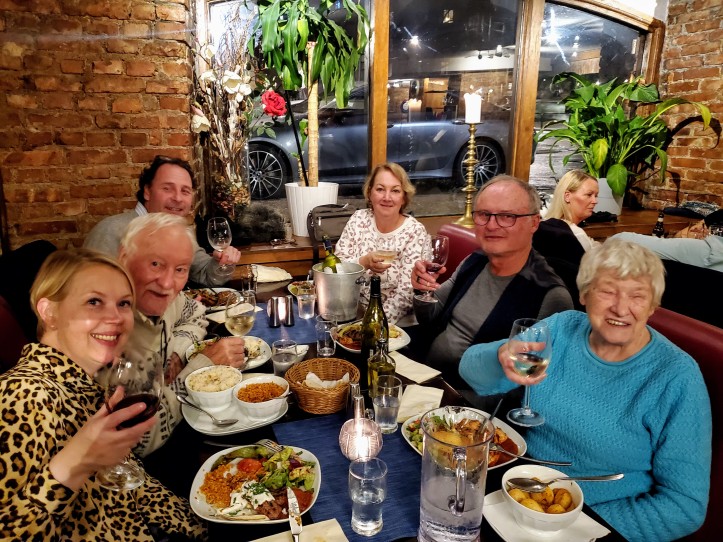 A fantastic dinner to end our first day

Today we were off exploring one of the islands south of Gothenburg.  It takes about an hour on public transport but is a fairly straightforward journey by tram and bus.  My mum and dad had already gone ahead with Minna in the car so were waiting for us when we got there.  I was very impressed that they had managed to walk so far.  Michael had other plans for Anthony and I!  A short walk around the island he said, not too hard. I’m not sure I agreed with him by the end.  Up and over rocks and boulders, walking along planks and hugging rocks was not my idea of a quick hike.  But it’s a beautiful island, probably better in summer though. 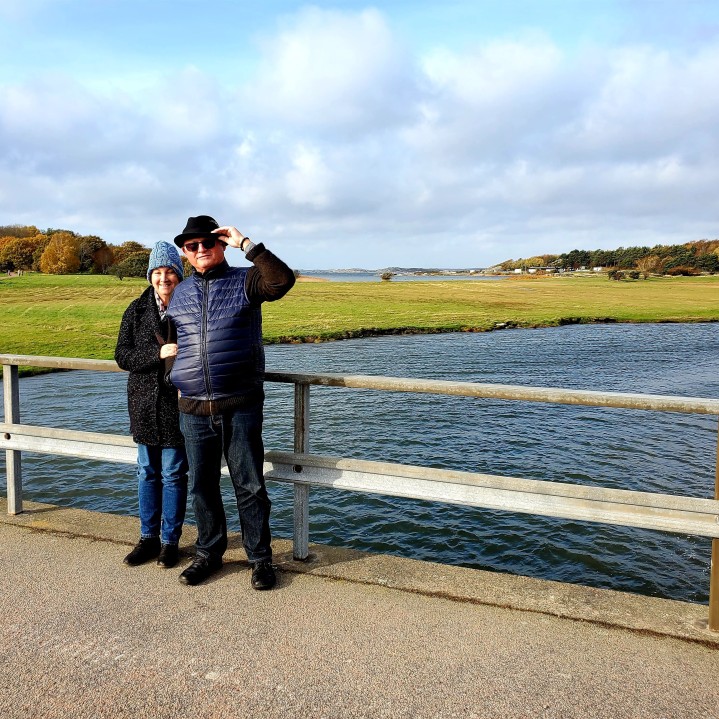 At the start of our walk

My mum looking very glamorous in her Russian hat 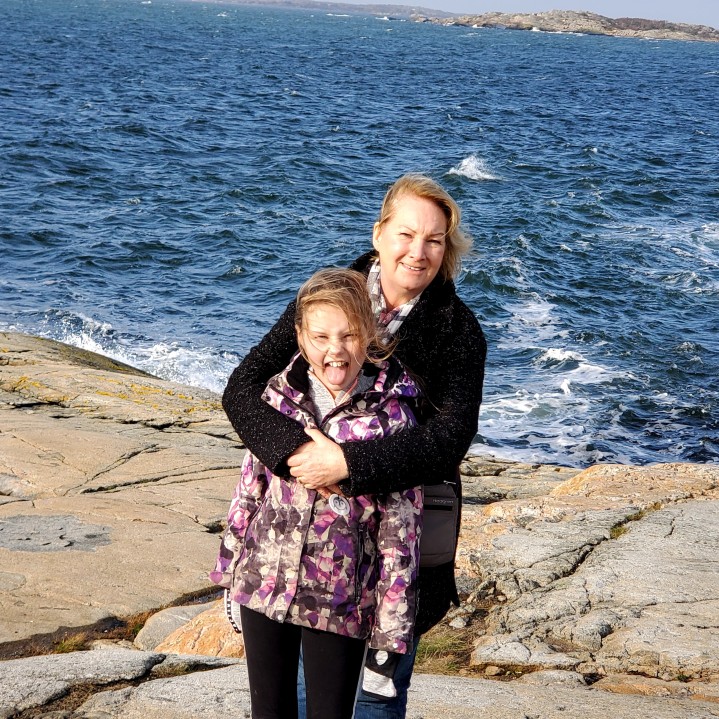 This is where I walked the plank

After the strenuous morning activities it was off to the ice hockey for the men and onto Haga for the girls.  Haga is one of the oldest neighbourhoods in Gothenburg, known for its cobblestone streets and picturesque houses.  There are plenty of cute cafes and restaurants to eat and many quirky little shops.  We had a lovely afternoon here and also stopped for lunch. 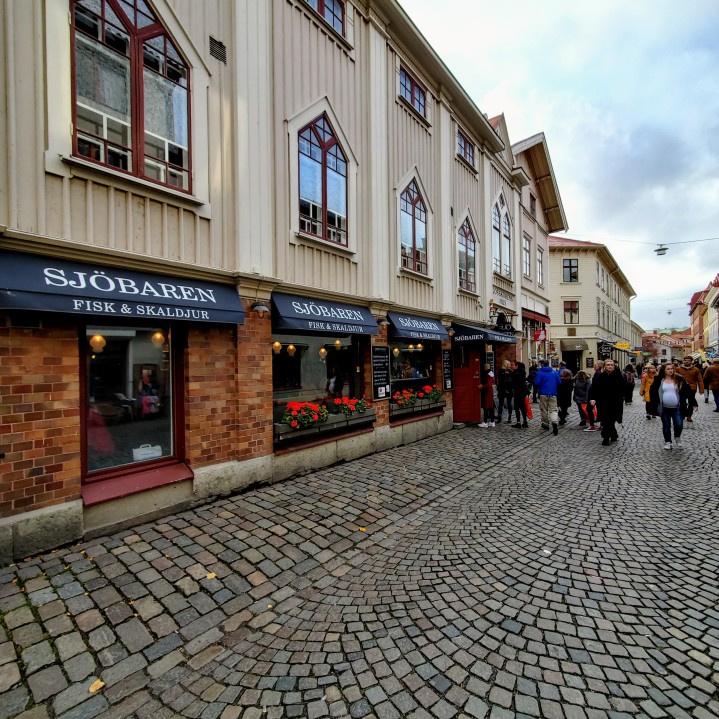 One of the restaurants in Haga 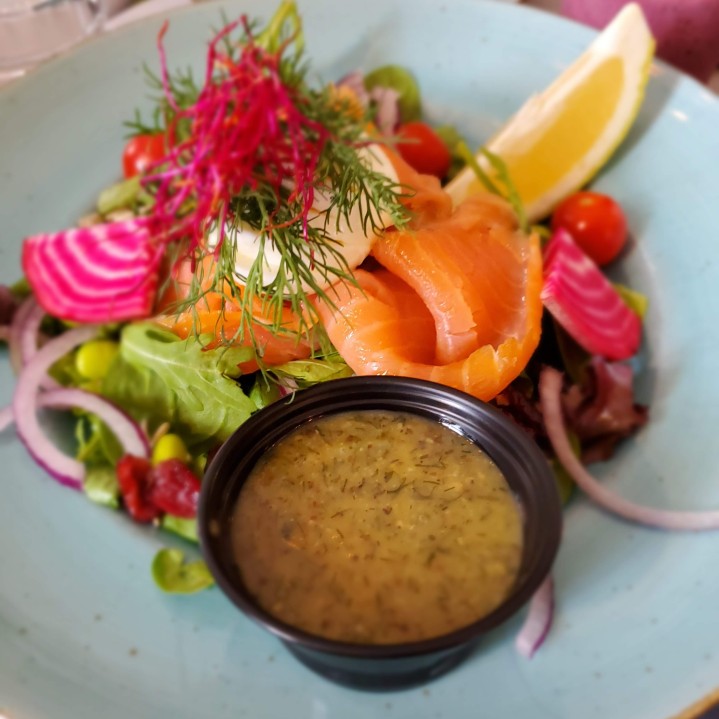 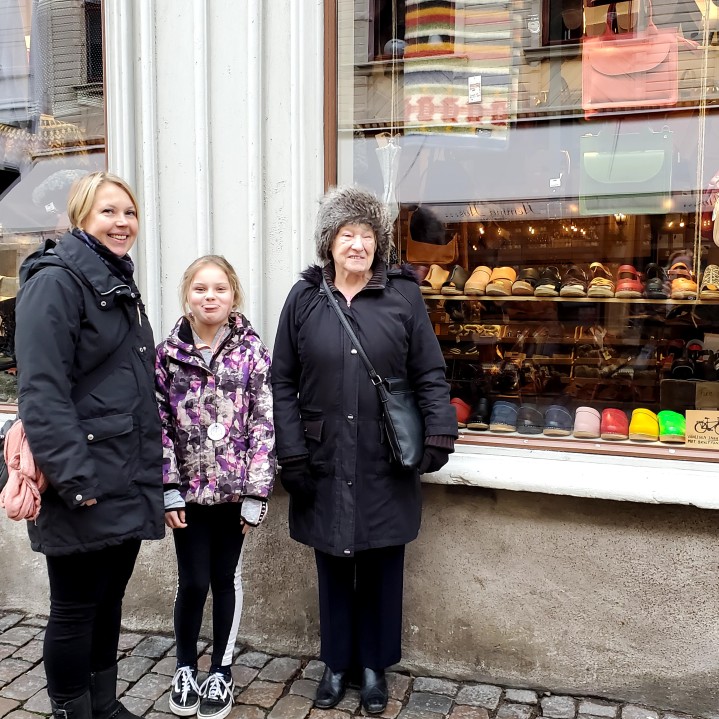 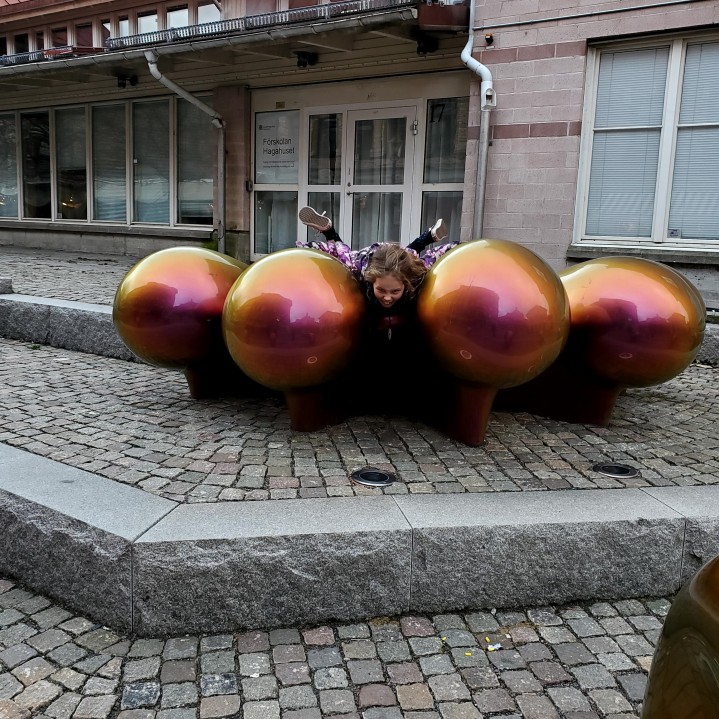 Zara on one of the sculptures in Haga 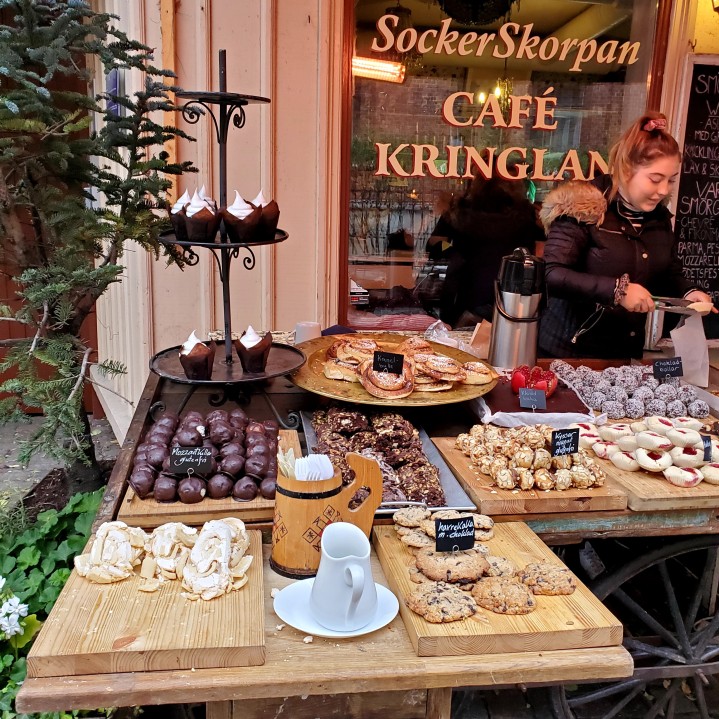 One of the many bakeries found in Gothenburg

We walked passed this memorial and statue on our walk back into Gothenburg.  It’s a memorial of Raoul Wallenberg who is remembered for saving tens of thousands of Jewish people during WWll.  He disappeared in January 1945.  According to Russian news he died in a prison cell from a heart attack in 1947.  Although today his death still remains a mystery.

The next day and our short visit had ended already, but not our travels!  We were off to  Copenhagen on a flix bus.  The journey is around five hours and crosses over the famous Oresund Bridge.  I’ll be writing about this in my next post!