Hyderabad is the only place I’ve actually been to in India, and we spent a week here over two years ago.  Five days probably would have been enough but with plane timetables we decided to add the two extra days for rest and relaxation!  We travelled with my son Laurence and his girlfriend Maddy in January, so the weather was just perfect.  We stayed at the Taj Krishna, a beautiful hotel in the Banjara Hills. 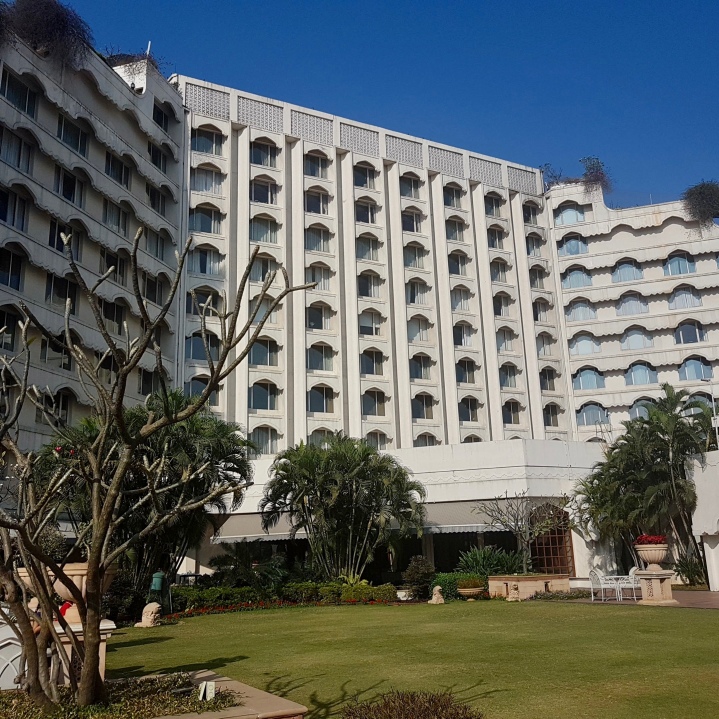 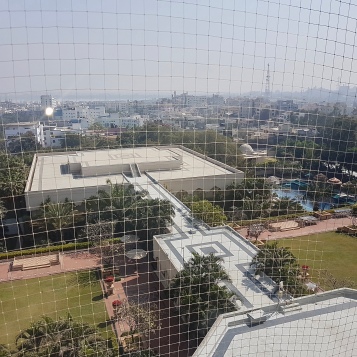 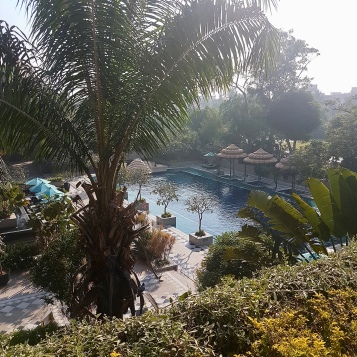 The view from our window

The reason we chose Hyderabad was because my dear hubby had recently read a book called “The White Mughals” by William Dalrymple.  It’s a book about the warm relations that existed between the British and some Indians in the 18th and early 19th century, when one in three British men in India was married to an Indian woman.

Anthony was interested to see if all the great palaces and houses that were built during this time were still standing.  Sadly we found that many of these grand buildings are in great decay and not accessible.  Some have been turned into colleges and hospitals, but there doesn’t seem to be the demand or need to renovate these beautiful old buildings.

This was one of the places that I had read was easy to get around and you could do it on your own!  Once we arrived there in our taxi and were dropped off, madness and mayhem greeted us.  We managed to cross a very busy road complete with cattle, goats  and schoolchildren and wandered up to the entrance gate.  We didn’t have to look far before an avid tour guide stepped into our path, offering to lead us around the fort with a detailed history.  After Anthony had bargained a good price, we headed off.

Maddy and Laurence leading the schoolgirls!
The entrance to Golkonda Fort

Golkonda Fort has a history reaching back into the 12th Century. A shepherd boy was once walking on this hill where he came across a God idol, the King that time decided to built a fort on the hill, which then came to be known as Golconda (Shepherd’s Hill) Fort.

With perimeters of around 11 kilometers, the fort has 15 to 18 foot high walls. It has huge gates that have pointed iron spikes on them. This protected the fort from Elephants damaging the fort as well as enemy attacks.

There is a great sound system in the Fort and the sound of clapping at the entrance can be heard a kilometre away.  This was apparently used for communication purposes and to alert the King of any attack.  (Source:  Hyderabad Tourism)

As far as I could see we were the only “Westerners” here and we were stopped every few steps to have our photos taken.  I think it was mostly Maddy they were interested in!  I made a joke about the one with Laurence in saying they would probably photoshop him out! 😆

On top of the world with views of  sprawling Hyderabad 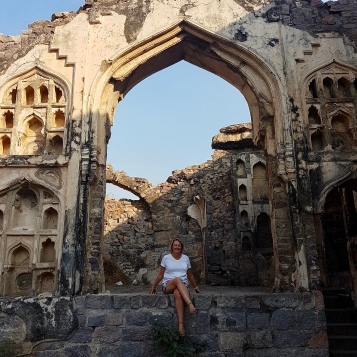 One of the many semi circular bastions; underground arches;
on top of the fort and sitting under one of the derelict arches 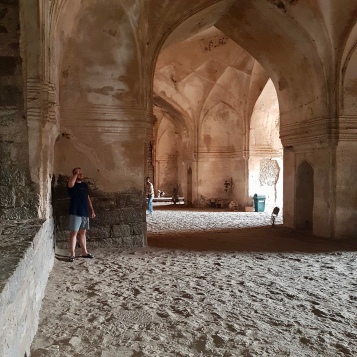 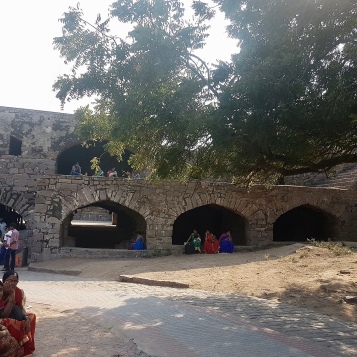 Whispering walls; through the window;
Women at rest; a view through an archway

This was a fantastic place to visit and our guide was extremely informative, very chatty and funny! He even guessed my age correctly, which was a bit rude I thought.

Our driver was waiting patiently to drive us back to our hotel.  On the way back we stopped by Hussain Sagar Lake and stopped to take a photo.  As we stepped out of the car three young men approached Laurence and asked to see his ear!  Then just grabbed it and it looked like they were about to pierce it, but he jerked back and said “hey get off me”.  Our driver said they just wanted to syringe it!  Very random. 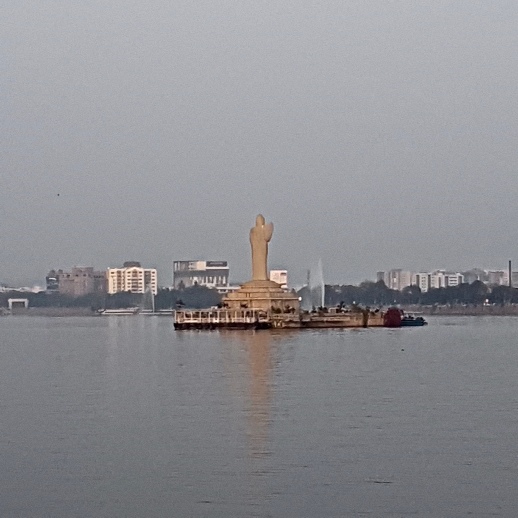 Gautama Buddha in the middle of the heart shaped lake

Dinner that night was at a restaurant called Paradise, very popular with ex-pats so the concierge told us. It’s famous for Biryani.  Even though I asked for the mildest one it was still far too hot for me!  Anthony and Laurence also struggled and they like a hot curry.