Deciding to go on a road trip was not a hard decision, as my dear hubby loves a drive!  Also our son Laurence was driving back with his girlfriend, Maddy, to begin their new life in Melbourne, so why not accompany them and drive on a bit more.   And so it begins!

We started our journey on a Sunday morning and did not leave nearly early enough, as per usual.  The great thing about road trips is the amount of luggage you can take,  no weight restrictions here.  So we loaded up the car with our stuff plus we also had some of Maddy’s and then the car was full.
The first stage was going to take us 722 km and around 8 hours with a couple of stops along the way.
Laurence and Maddy had already left two days before to spend some time in Albany and Esperance, and we were going to catch up with them in Madura.

Anthony was driving the very comfortable Mercedes which is great for reclining in the passenger seat!  Sad to say I did not participate in any of the driving.
With just a quick stop in Coolgardie for a beer it was straight through to Norseman.
All the motels and roadhouses along the way tend to close at 8pm and we arrived just as the restaurant was closing.  Lucky I had phoned ahead and was able to order steak and chips for two otherwise it would have been the BP station for dinner. 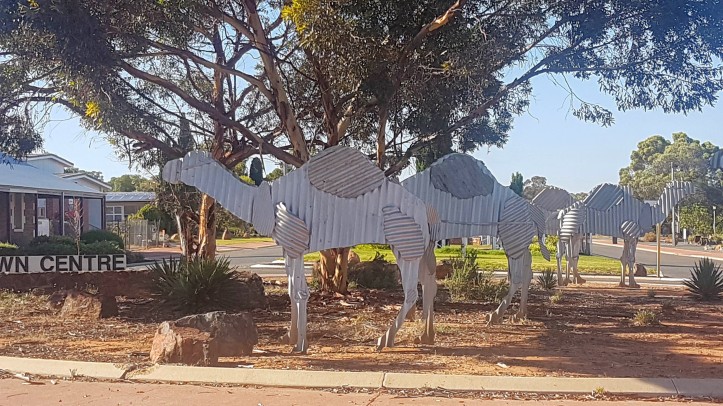 After a good night’s sleep at the Best Western we walked into town to get breakfast only to find we were way too early at 8 am.  Everywhere was closed.  So we walked back to have breakfast at the BP station.   I wanted to have a look at some of the historic sites Norseman had to offer, so we drove up to Beacon’s Hill Lookout.  On the way we passed by what was an old mining site.  It looked like the workers had just downed tools in the middle of the day and never went back.  So much machinery and piles of rubble everywhere.  The view from the top was fabulous.

Some history about Norseman

The discovery of a rich gold reef by Laurie Sinclair in 1894 as a result of his horse ‘Norseman’ uncovering a piece of gold bearing quartz, caused a town to be established and named in honour of the horse.

A rich history of gold mining has developed with many mines operating over the years and many ounces of gold being extracted.

The early pioneers had a very tough life. Water was always a challenge with condensers being set up on the salt lakes to assist in addressing the issue and the towns people relied on camel trains to bring supplies. For the women, raising their children with very little or no medical services, providing meals with basic cooking facilities and scant fresh food, it was very hard work and often heartbreaking.  Source: Norseman Info.

The photos below are some I took at the top of Beacon’s Hill.

With a brief stop in Caiguna to fill up and then again at Balladonia, we reached Madura around 5.30 pm. 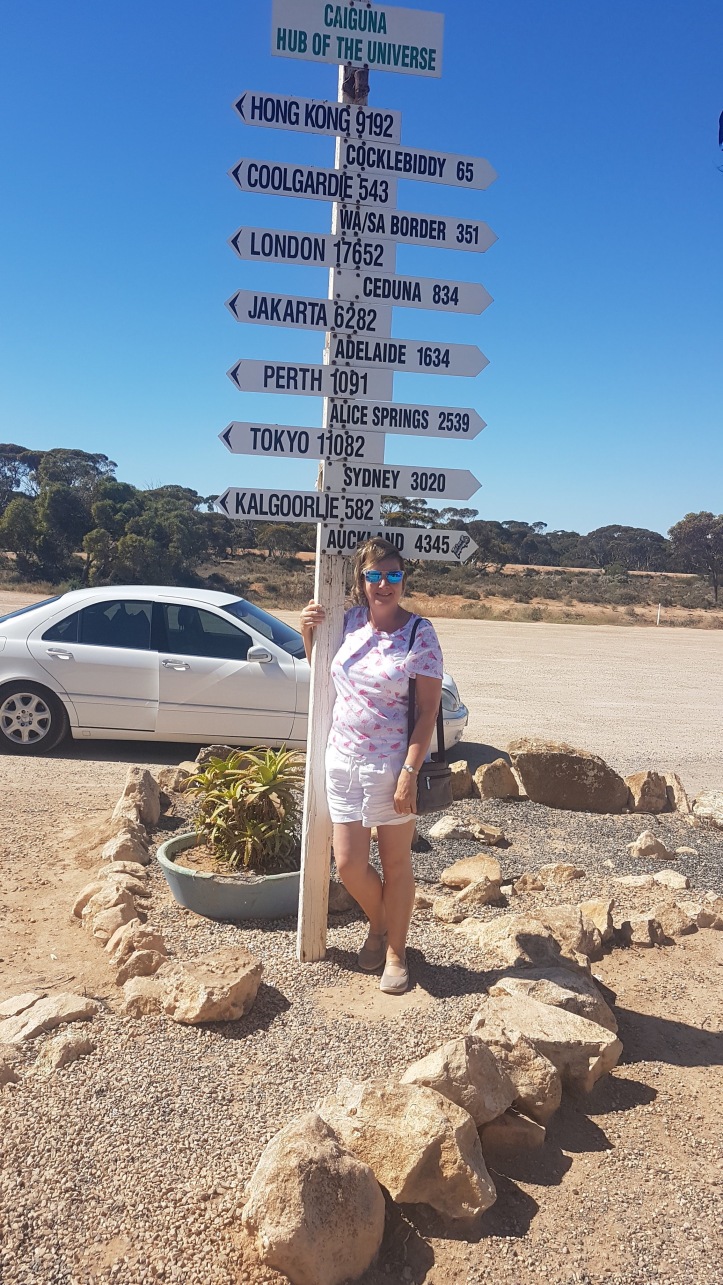 The only animals we saw were hundreds of dead kangaroos.  It was absolute carnage and they were just strewn all over the road in various poses.  A few times we saw vultures or eagles feasting on them.  Apparently the vultures gorge so heavily that they can’t fly high enough after and end up crashing through a road train’s windscreen.

We were staying at the Madura Pass Oasis Motel, I wouldn’t exactly call it an oasis but it wasn’t too bad.  Our rooms were very basic but at least it had a decent restaurant.  We sat and enjoyed a glass of wine in the sun waiting for Laurence and Maddy to arrive.  They finally arrived at 7.30 after their extremely long drive from Esperance.

An early wake up today as again we had lots of driving and we wanted to stop off at a couple of places for photo shoots.  Anthony went for an early morning walk up into the hills.  Most of these roadhouses don’t serve breakfast or if they do it’s over by 7am!  They cater mainly for the road train drivers.  I had brought with me fresh coffee and a plunger  a necessity for me to have a proper coffee in the morning.  We set off about 9am and our first stop was Mundrabilla for breakfast.

Next up it was Bunda Cliffs for a visit to the Great Australian Bite.  Then onto Border Village where we stopped to cross over to South Australia.  Nullarbor was next and then onto Ceduna. 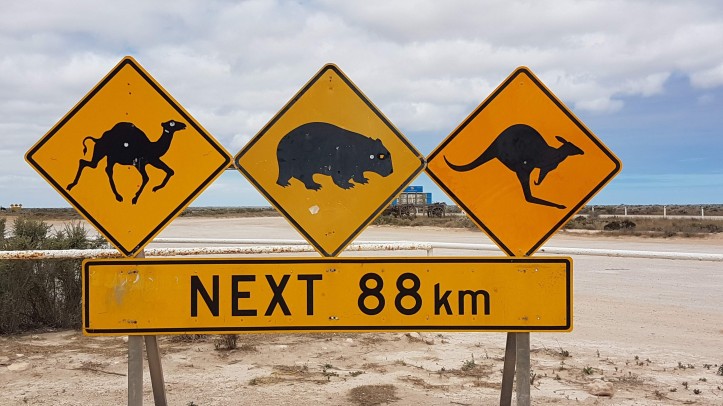 A bit about the Nullabor

The Nullarbor Plain in latin means nulls “no” and arbor “tree”.  Located on the Great Australian Bite Coast with the Great Victoria Desert to its north.  It is the largest straight road on the planet and it measures 146.6km in a completely straight line.  You can play 18 holes of golf along the world’s longest golf course – the Nullarbor Links.

Over 100,000 wild camels roam the plain. These camels were imported from British India and Afghanistan to use as transport while building the railroads during the 19th century.
Source: Nullabor Roadhouse.

We didn’t actually spot any animal other than dead kangaroos!

We arrived in Ceduna around 5.30 pm and stayed at the Ceduna Foreshore Motel.  There is a pretty nice restaurant attached to this motel so we had dinner there.  After we walked along the jetty to watch the sunset.  Extremely windy and very cold.

End of Part one – Perth to Ceduna 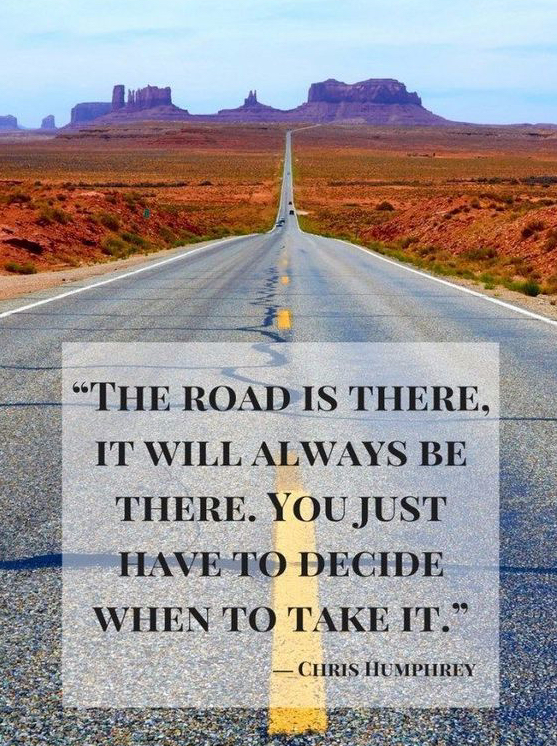